Snake’s Daughter: The Roads in and out of War

“A poignant memoir of loss by the daughter of a career soldier who died in Vietnam. Charles “the Snake” Hosking ran away from home when he was in high school to join the Canadian army and fight in WWII. He was discovered by his parents and discharged, with the intervention of his congressman, then joined the Coast Guard until, at age 17, he was given permission by his parents and the government to enlist in the US Army as a paratrooper. He went on to fight at the Battle of the Bulge and elsewhere, developing great skill as a warrior and an even greater affection for the army. Hosking married and had four children, Gilberg being the oldest. Until she was in her teens, she lived the life of an army brat: moving from fort to fort, learning new languages, making new friends, attending 12 schools in as many years. Perhaps as a result of her experience, she became a deeply thoughtful woman, looking inward to explain the many contradictions in her father’s life. Why did this man with an extremely high IQ and a startling facility with language never become an officer? How could he reconcile his rigorously disciplined way of life with his dangerous drinking habit? Why did he reenlist time and again to fight in a war that he knew was unwinnable? And, perhaps hardest for Gilberg to accept, how could he justify all the time he spent from his family for the army? In fact, in his third tour of duty in Vietnam he sacrificed his own life to wrestle an enemy soldier with a hand grenade to the ground—his final choice of the army over himself and his family. The simple structure of this annotated photo album belies the depth of the work, shaded and shadowed with layers of meaning and sentiment.”

“Snake’s Daughter is also partly the autobiography of a soldier’s daughter. In her intense effort to discover who the Snake really was, the author discovers much about herself. Her father was rarely there when she was growing up, and she had little understanding of why he kept going off to train and fight, but he did leave photos meticulously arranged in albums. Her search through her father’s photographs is the heart of this moving book.
‘I’ve been in mourning since the day I heard from a young soldier’s lips that my father had been killed in action near the Song Be River,’ she writes. ‘If grief at that stage is mostly wordless, that’s where I was all these years until the search through my father’s images sparked my own words and set them free.
She was still a teenager in May 1969 when President Richard Nixon presented the Medal of Honor to her 8-year-old brother Wesley, two years after Sergeant Hosking sacrificed his life for his comrades. ‘It took me 26 years to begin to search back to him—to find my father beyond the hero and beyond the man everyone spoke of as ‘an excellent soldier,’ she writes. ‘It would take me all that time to articulate a collected and collective shame and silence I could no longer bear.’
She was looking for simple answers about her father and herself, but the more she searched, the farther she moved away from simplicity. Still, she came away with plenty of insight. Her father, she comes to see, was not a killer who loved to go to war. ‘He went,’ she writes, ‘because for him his world came down to the men on his right and the men on his left, and for them he was willing to give his own life.’ Writing this book clearly served as a healing process for the author, and because she writes so well about a complicated process, many readers will share in its benefits.” 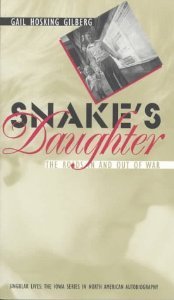